The Dixie fire continues its destructive tear through Northern California and now claims the rank of the state’s 11th largest wildfire in recorded history after growing roughly 20,000 acres.

The fire jumped from the No. 13 spot overnight Thursday.

Now burning into its third week, the massive wildfire has seared 240,595 acres across a quartet of counties north of Sacramento, according to the California Department of Forestry and Fire Protection. Containment sits at 24%, inching up 1% from where it was for several days.

At least 42 major structures were destroyed in its wake, according to CalFire. More than 20 minor structures have also gone up in flames. Those numbers will likely grow because damage assessment teams have not been able to go into many areas where the fire threat is still too high to send crews, said Capt. Mitch Matlow, a spokesperson with the multi-agency team managing the fire.

Mandatory evacuations across large portions of Butte, Plumas and Tehama counties have left scores displaced, and residents in nearby Lassen County are on high alert.

As of Thursday, three shelters for Plumas County evacuees housed 75 displaced residents, including 17 sheltering outside the facility primarily because “they want to remain with their pets,” who are not allowed inside, Plumas County sheriff’s deputy Chandler Peay said during an incident update.

Much of the Dixie fire’s destruction has been centered in the Indian Valley area, which has multiple reports of family homes reduced to rubble.

Lauren Redmore, 37, evacuated from her home in the small Indian Valley town of Taylorsville last Thursday and said waiting for updates has been challenging. She and her husband moved to the area from Texas in January and never expected to be confronted with wildfire so soon.

“We have gone through a really difficult time emotionally,” said Redmore, who is now staying with friends in Corvallis, Oregon. “It’s been hard to stop myself from constantly checking the fire map.”

Seeing the Taylorsville community band together has been heartening, she said, but the notion that this could be the new normal for so many Californians has been hard to swallow.

“It’s been heartbreaking, my own personal grief for a place I barely know, and the collective climate grief that my younger colleagues know lies ahead for all of us,” Redmore said. “I can’t imagine what it would be like to raise a kid knowing this is their future.”

Much of the West has been plagued by extreme heat and drought due to the worsening climate crisis, which is drying vegetation and feeding massive fires earlier in the year. As of Thursday, 82 large fires have burned nearly 1.7 million acres across 13 states, according to the National Interagency Fire Center.

There are now more than 6,000 personnel battling the blaze — a figure that likely exceeds the population of Quincy, the largest town in Plumas County, said Chris Carlton, supervisor for the Plumas National Forest, during an incident update Thursday.

There’s cautious optimism among fire officials that the crews are making progress.

The fire’s overnight growth from Thursday into Friday was modest and partially due to controlled burns, Matlow said, explaining that “one of the tools that we use to fight the fire is fire itself.”

But there are fears that a weather system moving in on Friday will bring erratic winds and lighting — two ingredients that can fuel the fire and ignite new ones, he said.

On Friday morning, a base camp in Chico was consumed by smoke and a stable air mass hung over the fire. As the day heats up and the weather front strengthens, that air mass is expected to become unstable.

Winds could become unpredictable, with updrafts threatening to create a dramatic pyrocumulonimbus cloud above the blaze. Outflow winds hit the ground and travels through drainages. Erratic winds can cause erratic fire, Matlow said, “because the fire goes where the wind pushes.” 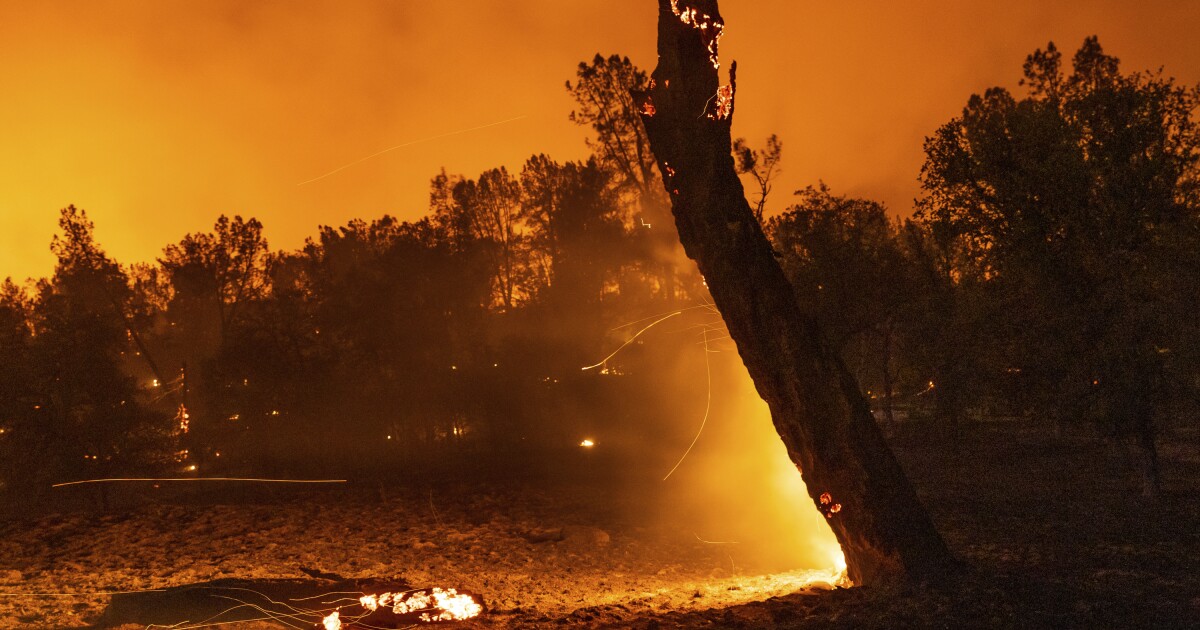