Eight months of political limbo and the impact of soaring inflation on energy prices and public sector pay have left a nearly £700mn hole in Northern Ireland’s finances as a deadline to call fresh elections looms.

Jeremy Hunt, the chancellor of the exchequer, last week warned of spending cuts and “eye-wateringly difficult” decisions in the wake of the government’s “mini” Budget, offering little hope of financial help for a region that is already one of the poorest in the UK.

“In Northern Ireland, reversing the overspend will be painful next year with the likelihood that even more cuts will be required,” warned Richard Ramsey, chief economist for Northern Ireland at Ulster Bank.

The fiscal hole has been exacerbated by the lack of a fully functioning executive in Belfast. Chris Heaton-Harris, secretary of state for Northern Ireland, has vowed to call an election on October 28 if the executive is not restored by then, despite the resignation of Liz Truss as prime minister.

Ann Watt, director of Northern Ireland think-tank Pivotal, said budgetary discipline in the region had been hampered by ministers not being able to meet every week to agree how to share funds.

“If you just focus on them running out of money, it just looks like mismanagement, whereas it all comes back to no executive, no budget, no collective agreement and a very difficult set of circumstances.”

Belfast has little power to levy taxes, raising only £1 of every £20 of its tax revenues itself. Instead it relies on an annual £15bn “block grant” from London.

Its deficit will intensify pressure on public services in the region. The NHS has the longest waiting lists in the UK and 27 per cent of workers are on the public payroll.

Northern Ireland’s executive was torpedoed in February when first minister Paul Givan, from the pro-UK Democratic Unionist party, resigned because of a row over post-Brexit trading rules.

The crisis deepened after elections in May were won by the nationalist Sinn Féin party. The DUP has since boycotted the executive and the assembly, demanding the removal of a post-Brexit customs border in the Irish Sea. As a result, institutions have been paralysed, no budget has been passed and caretaker ministers have only had limited powers.

Heaton-Harris told the Northern Ireland Affairs Committee at Westminster on Tuesday that he saw no grounds to change current rules, under which caretaker ministers would resign and a new election would be called, potentially on December 15, which officials say would cost more than £6.5mn. In the interim, civil servants would remain in charge.

Talks between the UK and EU to resolve the post-Brexit deadlock over Northern Ireland have resumed but there is not expected to be a deal that would satisfy the DUP before the October 28 deadline.

Northern Ireland has lived beyond its means in the past — it overspent by £800,000 in 2015-2016, according to the finance ministry, and reduced its budget by the same amount the following year.

But the current deficit is far larger. Conor Murphy, the region’s finance minister, said it had ballooned to £991mn by September and was only reduced by using £300mn in unallocated funds that officials had hoped to use to provide relief in the cost of living crisis.

People in Northern Ireland have been hit hard by energy price rises in the wake of Russia’s invasion of Ukraine. Around two-thirds use oil for home heating and prices have nearly doubled since last year. The UK government is offering all households £400 towards energy costs and an additional £100 to those households reliant on heating oil, but because there is no executive, the payments that will come from London have not yet been made.

Residents of the region have an average of £92 a week in disposable income after paying for essentials — half the level in London — according to a survey by the Centre for Economics and Business Research commissioned by supermarket chain Asda.

However, the region’s block grant is already at a record high and in the absence of an executive, Heaton-Harris said London would pass a budget for the region but finances are tight and “everybody will have to cut their cloth accordingly”. 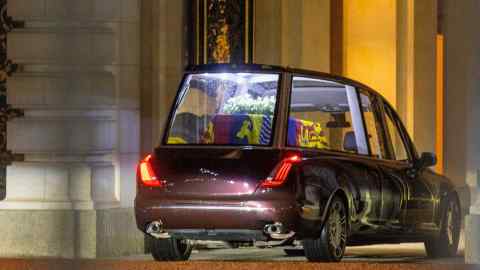 “There’s no way the Treasury can be seen to be giving goodies out to Northern Ireland when they’re being taken away in Great Britain,” said Graham Brownlow, an economics lecturer at Queen’s University in Belfast.

“Without a shadow of a doubt, the Treasury will use [the lack of an executive] as an opportunity to apply the thumbscrews.”

Yet any failure by London to provide extra financial support could make restoring the executive even trickier. “Why would you reconvene to make unpopular decisions?” Brownlow added.