Mayor Bill de Blasio knew that this year’s school schedule would be hard on working families, with students only returning to buildings part-time. That’s why the city promised this summer to quickly prop up child care programs for 100,000 students on the days they weren’t in buildings.

But as of March, only 15,000 children were enrolled in the Learning Bridges and Learning Labs programs, according to a report released Thursday by the Independent Budget Office.

Moreover, despite the city’s pledge to prioritize neighborhoods considered hard-hit by COVID-19, fewer than half the programs were located in those areas, the report found.

Even with the low uptake, the effort will probably run well over the initial budgeted price tag of $150 million. So far, the education department estimates that its portion of the tab will cost $93 million, double the currently projected amount. (The program is also run and paid for through the Department of Youth & Community Development, though the report did not include an estimate of how much would be spent from that city agency.)

“There are two things we point out that are issues: one is that they’re probably going to need more money by the end of the year,” said Paul J. Lopatto, a supervising analyst for the Independent Budget Office. “And the other thing is for all the effort, they only have 15,000 kids enrolled.”

In some ways, the enrollment numbers shouldn’t be too surprising. They track closely with how many students filed into emergency childcare centers that the city rushed to establish last spring, when school buildings first closed. Those Regional Enrichment Centers, which catered to the families of first responders and other essential workers, served about 13,000 students.

But there have been other stumbling blocks with getting the child care program off the ground this school year. Families of children with disabilities said they were turned away from Learning Bridges and Learning Labs sites that couldn’t accommodate their children’s needs. Others said that they were matched with inconvenient locations — transportation is not provided to the sites — or with operating hours that didn’t make sense for working families. Many families didn’t get seat offers until well after the school year began, which meant they already had to make other arrangements.

Fears of the virus are also likely contributing to low enrollment, with about 70% of students choosing to learn from home.

Vito Interrante, a top official at Children’s Aid, which runs four childcare sites, said that many families who sent their children to school buildings were worried about additional exposure to the virus at Learning Labs sites. He said attendance was higher in programs where the organization already had an established relationship with a school and their students.

“There were many parents who didn’t know us. They didn’t have a previous relationship, so this idea of trusting another organization with your kids,” was a tough hurdle, he said.

“We had space,” he added. “There weren’t enough kids.”

As for the cost, Interrante wasn’t surprised that the price tag remains high even while enrollment is low, because centers spent a good deal of money making sure they were ready with the appropriate number of staffers and protective gear such as masks, in case children did show up.

“Even though that many kids didn’t come or don’t register over time, you’re still geared up for it,” he said.

The city has tried to adapt the program to better suit families, even allowing students who opted for remote-learning only to enroll.

“Families made radical lifestyle changes around school attendance in the spring and fall due to COVID-19,” said Mark Zustovich, a spokesperson for the Department of Youth & Community Development. “Families had to balance their work schedules with assessments of the COVID risk in their communities. Due in part to these variables and the constantly evolving pandemic, enrollment of blended-only students was lower than expected.”

De Blasio has pledged to reopen schools full-time next year, though that will largely depend on the pace of vaccinations in the city, virus variants, and whether families feel safe sending their children back to buildings.

The budget report notes that less than $300,000, a fraction of this year’s price tag, has been dedicated to the childcare program for next year.

“Whether the program will still be needed in 2022 depends on the course of vaccination and reopening efforts and—especially—the future of remote learning options,” the report notes. 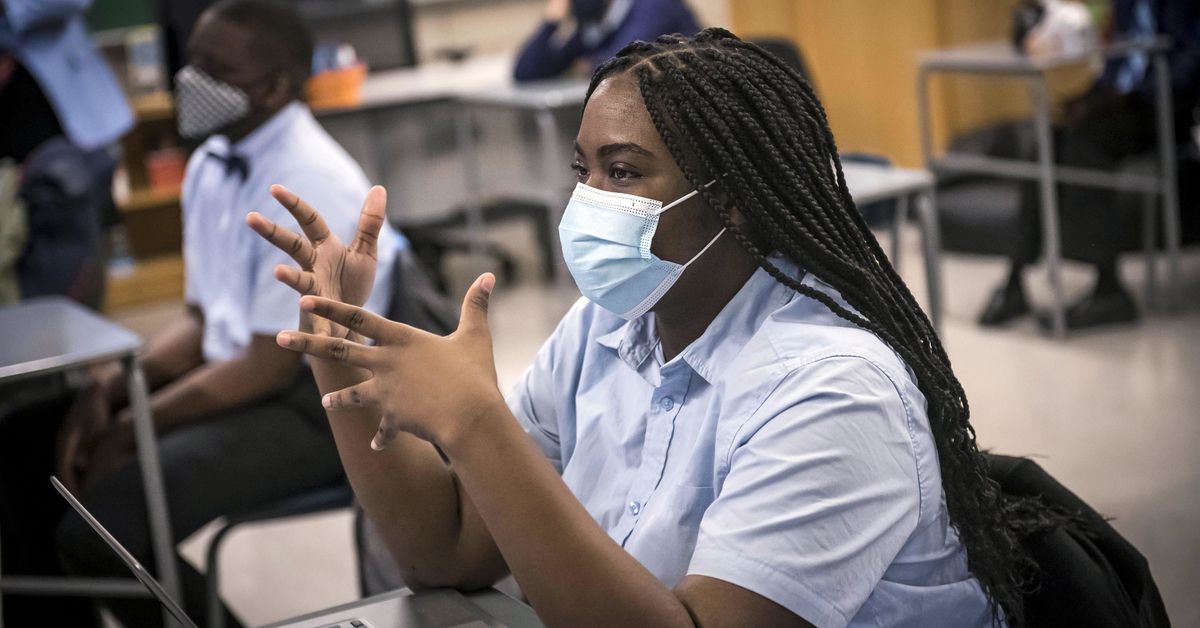 international education industry to return to pre-Covid levels by 2030

Boy and two others are killed in South L.A. when car slams into bank building
17 mins ago