Raj Subramaniam’s credibility was on the line this week as the FedEx chief executive tried to project confidence that he could correct the US parcels group’s course after failing to deliver on the upbeat forecasts he made just three months ago.

The company has long been seen as an economic bellwether, so when it previewed a substantial earnings miss this month, it not only sparked the largest daily drop in its shares but also sent a shudder through the wider market.

Now, though, Wall Street is asking whether FedEx’s own errors were more to blame than slowing demand.

Subramaniam took a beating from Wall Street analysts on an earnings call on Thursday when they grilled him on FedEx’s new cost-savings plan, asked why its peers had not reported a similar downturn and questioned whether it had the right leadership.

On September 15, the Memphis-based parcel service announced that its revenue for the three months to August would fall roughly $800mn short, driven by an unexpectedly large drop in global demand. The resulting guidance of adjusted earnings per share of $3.44 was far below Wall Street estimates of $5.14. Net income dropped more than 20 per cent to $875mn.

“How did it catch you so off guard?” one analyst asked on the call, sceptical of FedEx’s claim that such a sharp fall off was largely because of a changing global economy.

After riding a wave of pandemic demand for package shipping as people ordered more online, FedEx is now contending with a supply chain that is shifting back towards more normal volumes. Demand had been hit hardest in Asia and Europe, Subramaniam said, predicting a global recession.

But analysts asked whether mismanagement had played a part.

“Do you feel like you’ve got the right senior team in place to lead FedEx into the future?” a second analyst asked pointedly. Subramaniam ignored another analyst’s question on whether FedEx had made any “management mistakes”.

Subramaniam took over FedEx only six months ago, when founder Fred Smith stepped down. Three weeks ago Smith’s son, Richard, became head of FedEx Express, a controversial move as the division has been hit hardest by the drop in demand.

“We’re not screaming nepotism, but one could come to that conclusion. It’s not a good look for Richard because he just doesn’t have the experience that prior Express leaders did,” Barclays analyst Brandon Oglenski said in an interview. FedEx Express’s operating income plunged 70 per cent in the quarter to August, as shipping volumes fell 11 per cent.

Subramaniam said “what really got us” was “tremendous” unanticipated cost inflation. In response, FedEx announced it would raise its delivery prices 6.9 per cent from January, along with surcharges for delivering to remote areas and “peak residential pricing” in the US.

Yet a fourth analyst asked how the company could push through its largest price increase after volumes took a double-digit hit. “Isn’t that going to exacerbate the volume decline?” he asked.

The chief executive was also chastised for appearing first on CNBC last week instead of hosting a conference call to discuss the earnings miss with analysts. And in a blunder emblematic of the earnings discombobulation, FedEx accidentally released its results on Thursday hours before it meant to, attributing the mistake to a technical issue.

As the world’s largest cargo airline, FedEx is more exposed to global macroeconomic changes than its competitors, making it a pointer to where economic growth is headed.

Other logistic industry barometers point to slowing demand. According to Freightos, a logistics booking service, the cost of shipping from Asia to the west coast has fallen 80 per cent from a year ago, when US retailers were scrambling to secure goods for the holiday season. 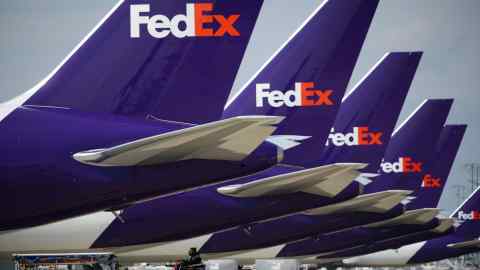 The lower ocean freight prices have also cut demand for air freight, an expensive alternative for companies hurrying to secure supplies: air rates this September are half what they were this time last year, Freightos said.

Some supply chain executives question whether FedEx’s troubles should be seen as a sign of worse to come, however.

Its warning had “caused quite a stir”, Mario Cordero, executive director of California’s Port of Long Beach, told the Financial Times. But he doubted that it heralded “the worst scenarios” some analysts saw for the domestic economy. The supply chain was simply “normalising” after the pandemic drove an extended surge in demand, he said.

Analysts acknowledged in interviews that economic changes certainly played a role, but thought FedEx had created some problems for itself, including “decisions to clog up the network with a bunch of lower-yielding ecommerce”, according to Bernstein’s David Vernon.

UPS has also signalled a more difficult environment, but in more tranquil language and with confidence that its network could weather the storm.

Oglenski, of Barclays, echoed long-held concerns expressed on the call about how FedEx measures up to its closest rival. The company had about half the operating profitability of UPS, he said, “because FedEx is much less efficient”.

Vernon wondered whether FedEx executives had been so focused on “putting a rosy vision out there” at June’s investor day “that they maybe took their eye off the ball”.

At the time, Subramaniam gave a bullish assessment of FedEx through 2025, saying that it stood “at a pivotal moment”. It was, he said then, “delivering both next quarter’s profits and the next quarter century of our legacy”.