Rishi Sunak, former chancellor, has emerged as the early favourite to become Britain’s next prime minister, after Liz Truss terminated a 44-day premiership marked by economic and political turmoil.

Truss’ resignation made her the shortest-serving prime minister in Britain’s history; her time in Number 10 will be remembered for a disintegrating economic policy and a disastrous slump in Conservative party support.

Sunak, who stood against Truss for the Tory leadership in the summer, predicted correctly that his rival would set off panic in the markets if she pressed ahead with a massive package of debt-funded tax cuts.

“Rishi is the easy favourite,” said one cabinet minister and bookmakers agreed that the 42-year-old is the frontrunner to become the country’s first non-white prime minister.

But Sunak is disliked by some Tory MPs and party members for his role in bringing down Boris Johnson in July — his resignation as chancellor helped to eject the then prime minister — and could struggle to reunite his deeply divided party.

I hope you enjoyed your holiday boss. Time to come back. Few issues at the office that need addressing

Johnson’s supporters are urging him to return as the only viable “stop Sunak” candidate. “I hope you enjoyed your holiday boss,” tweeted Tory MP James Duddridge, a former parliamentary aide to Johnson. “Time to come back. Few issues at the office that need addressing.”

Penny Mordaunt, who also stood for the Tory leadership in the summer, is seen as Sunak’s most dangerous challenger. Suella Braverman, who was forced to quit as home secretary on Wednesday, might also stand.

But the rules of the Tory leadership contest appear to favour Sunak and his well-organised campaign team, which has been preparing for weeks in anticipation of Truss’s downfall.

To enter the contest, a candidate needs the votes of 100 MPs by Monday, a total which Johnson could struggle to reach. Many colleagues are still angry over his conduct in office and his role in the “partygate” affair.

Sunak has strong support among MPs; he received 137 votes in the final round of MPs’ voting in the last leadership contest in July, compared to Truss’s 113 and Mordaunt’s 105. Party members preferred Truss.

Sir Graham Brady, chair of the 1922 committee of backbench Tory MPs, said if only one candidate won enough support, then the new leader would be confirmed on Monday, when nominations close.

Otherwise, the leader will be chosen by Friday October 28, with MPs set to reduce the list to two and party members then voting online to determine the result.

As there are 357 Conservative MPs, a maximum of three can make it on to the ballot. “We fixed a high threshold but a threshold that should be achievable by any serious candidate who has a realistic prospect of going through,” Brady said.

In another innovation, later on Monday MPs will be given an “indicative”, or non-binding, vote on a shortlist of two candidates to give a steer to party members as to which is most likely to unify a fractured parliamentary party. Many Tory MPs believe this will also favour Sunak.

Jeremy Hunt, chancellor, who has been preparing a debt-cutting fiscal plan for October 31, is a former backer of Sunak. Tory MPs believe Sunak would keep him at the Treasury if he became prime minister.

Truss was told to quit by senior party figures on Thursday, leaving demoralised Tory MPs with the challenge of choosing the UK’s third prime minister in a matter of months.

In a brief statement in Downing Street, she said she had notified King Charles she was standing down as Conservative leader so that a new party leader and prime minister could be chosen next week. 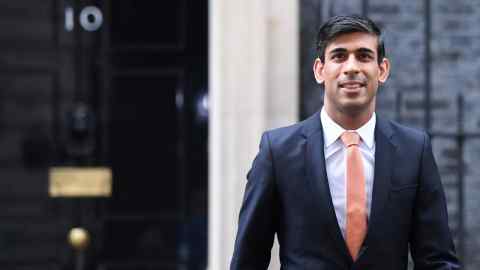 During Truss’s premiership, which only began on September 6, her economic strategy crashed and burnt, her chancellor Kwasi Kwarteng was sacked and Braverman was forced to resign as home secretary on Wednesday. The opposition Labour party has taken a lead of over 30 points in several recent polls.

Gilts largely shrugged off the news of Truss’s resignation, after rallying in the lead-up to her statement. The yield on the benchmark 10-year gilt was 0.03 percentage points higher at 3.9 per cent by late afternoon in London trading. The 30-year yield slipped 0.04 percentage points to 3.95 per cent, a small rise. Sterling held on to most of its gains against the dollar to trade 0.4 per cent higher on the day at $1.126. It had earlier climbed above $1.133.

Your smartphone could be used to estimate your risk of dying