Inside Liquidity Services‘ 130,000-square-foot warehouse in Garland, Texas, the aisles aren’t lined with typical merchandise. Instead, they’re stacked with returns from Amazon, Target, Sony, Home Depot, Wayfair and more, all in the process of being liquidated.

“Liquidators are coming in and they’re buying up all of this product in bulk. They’re then packaging it, palletizing it and reselling it, either to be resold on a site like eBay or Poshmark, or even to individual consumers. So it’s turned into a much bigger portion of the industry than we’ve ever seen before,” said Sonia Lapinsky of consulting group AlixPartners.

The liquidation market has more than doubled since 2008, reaching a whopping $644 billion in 2020, according to data from Colorado State University.

“A lot of this used to be controlled by the mafia,” said Zac Rogers, assistant professor of supply chain management at Colorado State University. “It’s a good way to hide money, honestly, because nobody’s looking at returns. Especially 40 years ago, no one was looking at returns.”

But in 2021, a record 16.6% of all merchandise sold was returned, up from 10.6% in 2020, according to the National Retail Federation. For online purchases, the average rate of return was even higher, at 20.8%, up from 18% in 2020. Processing a return can cost retailers up to 66% of an item’s original price, according to returns solution company Optoro.

“Everyone’s very worried about price increases right now. I would suggest that it’s possible part of the inflation is these huge amount of returns, that have to be sold at a loss, is detracting from the profitability that a company normally has, and they have to raise their prices,” said Tony Sciarrotta, executive director of the Reverse Logistics Association.

There’s also a big environmental cost. Returns that aren’t liquidated are often destroyed by being incinerated or sent to landfills. Optoro estimates U.S. returns generate an estimated 16 million metric tons of carbon emissions and create up to 5.8 billion pounds of landfill waste each year.

This pain point for mainstream retailers is now big business for liquidators. There are now thousands of companies in the booming space. One of them is GoodBuy Gear, which specializes in safely liquidating items for babies and young kids.

“Buying one used item, it saves 82% of its carbon footprint and consumers are really starting to make smart choices. And so I think that the boom in liquidation is really fueled by consumerism and how it’s shifted from new to used,” said Kristin Langenfeld, CEO and co-founder of GoodBuy Gear.

Sustainable shopping options are a growing priority for younger shoppers.

“The circular economy exists to make sure these items find a home, connect it with a family or a young consumer, and keep it out of the landfill,” said Bill Angrick, CEO of Liquidity Services. He co-founded the company in 1999 as Liquidation.com, with $100,000 of his savings.

“My father and I used to pick up used books and recyclable bottles. Fast forward to the start of eBay. My father and I started toying around with that. We realized that a marketplace model can create value for virtually any type of used item,” Angrick said.

By 2000, a year after it launched, Liquidation.com had its first major sale: a $200,000 marine vessel for the state of Georgia. In 2006, it went public under its new name Liquidity Services. Its stock peaked in 2012, trended downward for the next seven years, then saw a resurgence during the Covid pandemic.

Liquidity Services remains the only major publicly traded liquidator. Another big player is B-Stock Solutions, which runs branded liquidation marketplaces for huge clients like Amazon, Walmart, Home Depot and Costco. Howard Rosenberg founded B-Stock after six years at eBay, where he saw the benefits of specializing in liquidation for others, at scale.

“Companies typically don’t want to spend a whole lot of time and effort focused on that little slice of the pie. They want to focus on the 99% slice of the pie,” explained Rosenberg.

Liquidity Services sells returned items on a variety of marketplaces. There’s Liquidation.com where pallets of returns and some individual items are auctioned off to the highest bidder, Secondipity for direct sale of individual items, and GovDeals for some especially unusual items.

“We’ve sold road paving equipment, entire gymnasium floors, scoreboards. All of the colleges and universities that are publicly funded, all of that equipment and uniforms come through our marketplace. We sell construction equipment. We sell the bucket trucks for power and utility companies,” Angrick said.

When it comes to electronics, many returns arrive damaged and can’t go right back out for resale. Liquidity Services refurbishes hundreds of TVs every day that it says sell for 60% to 70% of the original price. Refurbished electronics have gained popularity as the supply chain backlog caused a shortage of new goods. Refurbished noise canceling headphones and TVs are in high demand, and also multimillion-dollar refurbished items, like the machines used to make microchips.

A Liquidity Services employee refurbishes a TV at a warehouse in Garland, Texas, on January 31, 2022.

“We’ve seen Fortune 500 companies access used equipment on our marketplace because the time to ship is shorter in the circular economy than originating a newly manufactured good, putting it on a vessel, transporting across the ocean, to a port that’s likely backlogged for six to eight months,” Angrick said.

Many retailers are now selling refurbished items directly as demand for secondhand items grows. Amazon has entire sections of its site devoted to this. There’s Warehouse Deals for used goods, Amazon Renewed for refurbished items, Amazon Outlet for overstock and a tongue-in-cheek daily deal site on the fringes of the Amazon community called Woot that sells a $10 “Bag of Crap.”

Best Buy now has an online outlet where it sells open-box appliances and TVs, and HP has an outlet with refurbished computers and more.

“When it’s refurbished, we get really good recoveries back from it: probably 80% to 100% of recoveries depending upon the seasonality in the market. But right now, the market is very strong because of the supply shortages on the forward side,” said Julie Ryan, HP’s manager of North America returns.

The liquidation boom has spawned another trend, too. Hundreds of bargain bin stores are popping up all over the country, with names like Dirt Cheap and Treasure Hunt Liquidators. Dozens of customers line up — sometimes even camping overnight — to get first pick after weekly drop-offs of liquidation pallets. They dig through big bins of returns in search of trending items they can flip for a profit.

Shoppers line up to search through bins of liquidation pallets at Treasure Hunt Liquidators in Raleigh, North Carolina, on February 11, 2022.

“Stores like Big Lots, Bargain Hunt, Ollie’s Bargain Outlet: All of these stores and then eBay, and even Amazon has gotten into it. So they’re selling the returns back to consumers because 90% of the time, there’s nothing wrong with it,” said Sciarrotta of the Reverse Logistics Association.

Liquidity Services has its own take on the direct-to-consumer trend. At the company’s new AllSurplus Deals warehouse that opened in Phoenix in October, customers pick up items they’ve won in online auctions that usually start at $5. This is especially helpful for liquidating bulky items, like kayaks, which would be prohibitively expensive to ship. Angrick says Liquidity Services will open a second AllSurplus Deals warehouse in Dallas later this year.

Watch the video for an exclusive tour inside a Liquidity Services warehouse, to see the booming business of processing and reselling excess and unwanted goods on the secondary market. 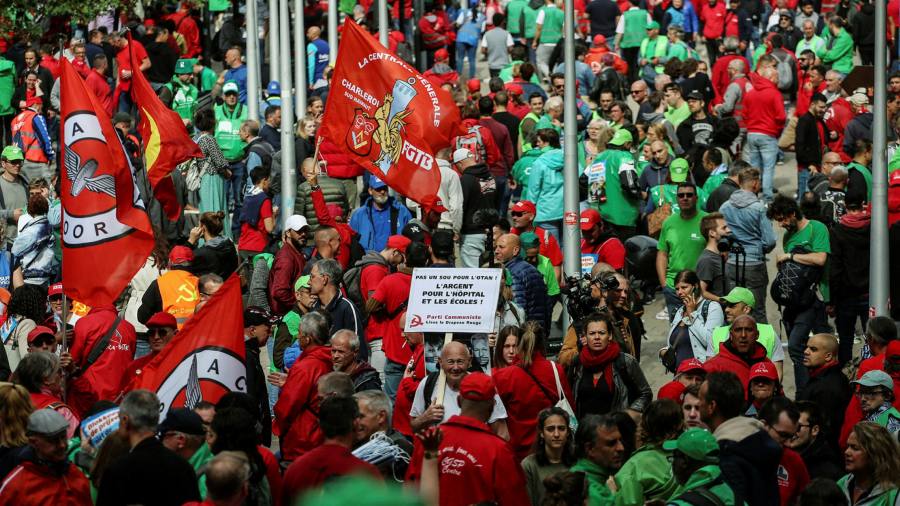