Older Honda and Acura values are seemingly on a nonstop, uphill climb these days, assuming you have the right old Honda or Acura. The NSX and Integra Type R kicked this desirability train off, and it’s since trickled down to others like the Honda S2000, CRX Si, and various Civic Si models (most notably the sixth-generation EM1). We’re accustomed to seeing big dollar results in various online auctions at this point, but the question that often pops up is: Are these old Hondas really worth what people are paying for them?

That’s an impossible question to answer for plenty of reasons — everybody derives happiness from cars in their own ways — but what we can do, is tell you what it feels like to be behind the wheel of a few of them. Recently, Honda invited us out for a day of cruising around in three cars from its Heritage Collection: a 1985 Honda CRX Si, 1986 Honda Civic Si and a 1975 Honda Civic Hatchback CVCC. OK, twist our arms.

The CRX Si is easily the most desirable of all the CRX models that graced the world. Not only was it fun, frugal and attractive, but it’s the Honda that largely kickstarted the now long-running history of Si models in America. The Civic Si came a year later, and the Prelude Si arrived alongside it, yet it’s the CRX Si that can command shocking sales prices today.

Slipping into the cockpit of this 1985 example with only 11,074 miles on the clock is one great way to instantly make any bad day better. The patterned seats have high bolsters that softly hug your whole body, but never cause any notable hindrance getting in or out. That three-spoke steering wheel features a thin rim, and the five-speed manual shifter sticks up prominently from the floor. The view out the rear is only partially blocked by the Si’s rear spoiler, but the view out everywhere else is superb. There’s a surprising number of audio controls that offer manual adjustment of the sound, and the “Honda High Power System” and “Dolby System” branding on the head unit are just as much relics of another time as the rest of the car — and you can expect sound quality to match.

The dash is classic Honda with simple and easy-to-read gauges — a 6,500 rpm redline shows prominently on the tachometer, indicating that this car very obviously doesn’t come equipped with one of the sky-high-revving VTEC engines that would come a number of years later to other Hondas. Instead, the CRX Si features a 1.5-liter four-cylinder good for a modest 91 horsepower and 93 pound-feet of torque. In a car as light as the CRX Si (just under 2,000 pounds), the power increase of 15 horses and 9 pounds of twist for the Si over the regular CRX makes a big difference. One might say that it is Sport injected — we’ll see our way to the door. 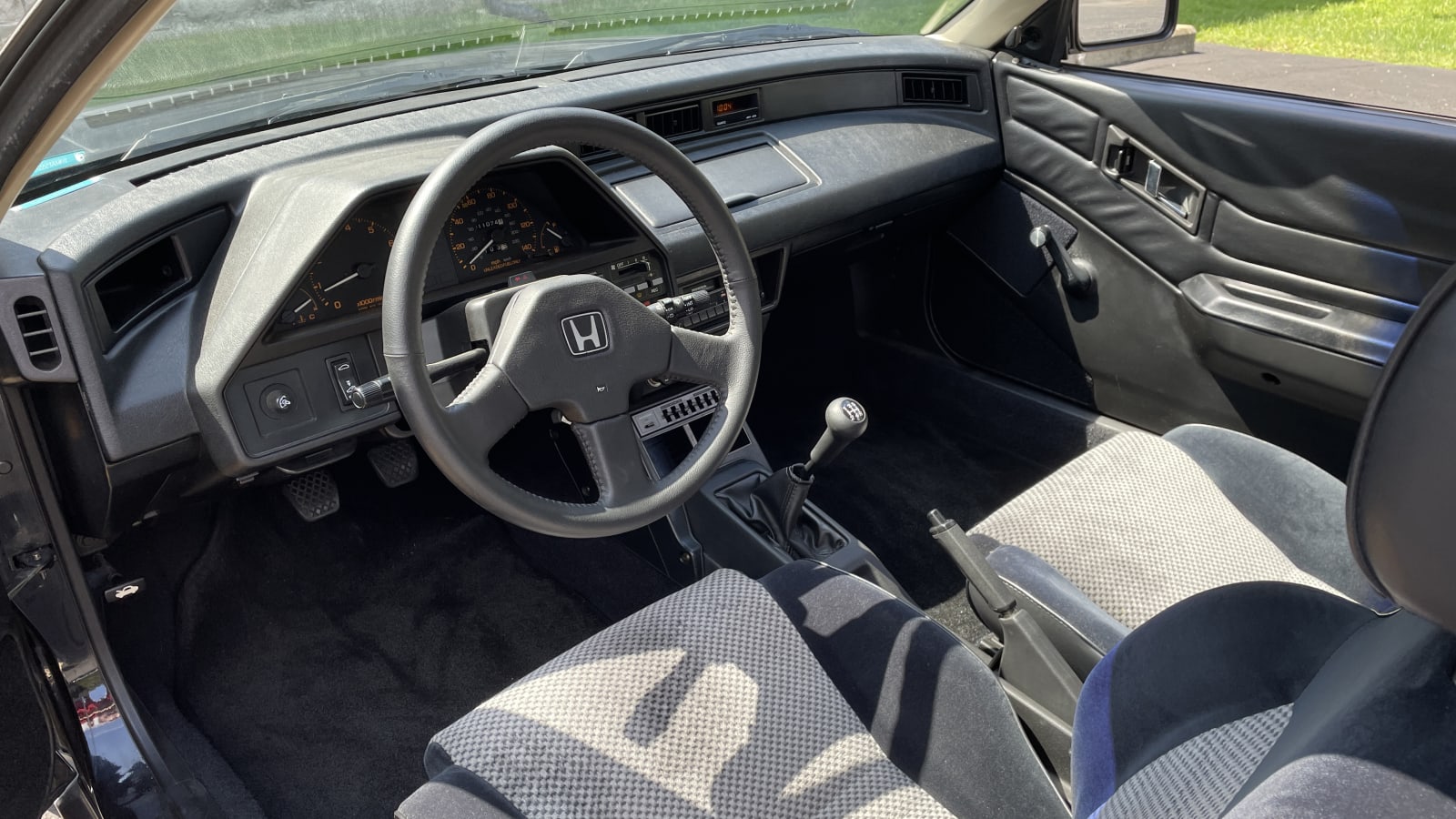 Any car with less than 100 horsepower must feel like a dog, though, right? Nope, not this CRX Si. It gets up and moves out with more pep than you’re likely expecting, and the engine makes power consistently across the rev band. This isn’t some peaky rev-monster like some of the Si models that would follow the CRX. Instead, it’s just a pleasant, pure and plenty-potent four-cylinder. It sounds strong, meaty even, for such a small engine. And no, there’s nothing particularly special about the note as it reaches for redline, but it’s a sonorous noise we would look forward to hearing every day.

How’s it handle? Tough to say, as our drive route was largely limited to rolling about Woodward Ave. and the neighborhood streets throughout. But gosh this steering is delightful. It’s not power-assisted, and every ounce of road gets transmitted back into the lovely steering wheel. New cars with electric steering wish they could steal just a little bit of this CRX’s natural ability to talk to the driver nonstop. 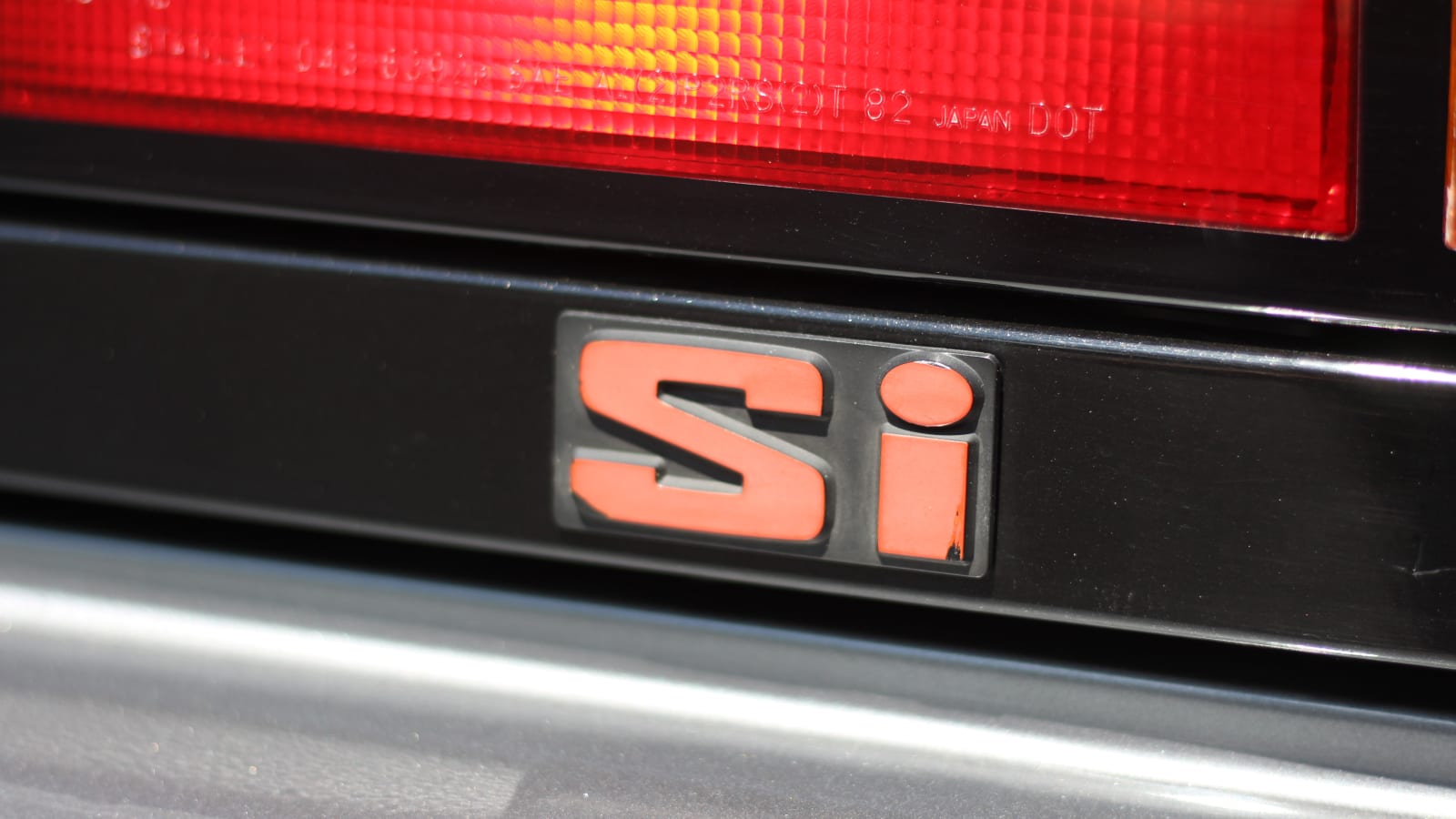 The steering and curb weight are two of the absolute best things about this car. However, what doesn’t come anywhere close to holding up to modern standards are the tires — Honda had this CRX fitted with period-spec reproduction tires, and they prefer to fold under themselves when you take a corner quickly. The limits are low, but at least the massive sidewalls and little wheels make for a decent ride on poor Michigan roads.

Beyond the way it drives, the CRX gleans much of its magic from that iconic design. The first year of the Si in 1985 features the two-tone body-to-bumper look, with this example being the black body with gray-painted bumpers. Its special red accents continue to be an Si staple to this very day, and it’s just the right amount of aggressive with the twin tailpipes and big “CRX” in the rear taillight. It’s safe to say that we like the old CRX Si a great deal, as this is the second time we’ve driven it, and both times have resulted in our falling for the splendid two-door liftback.

Our time spent in the 1986 Civic Si was a good deal longer than that in these other old Hondas, and we came away thinking that it would be difficult to find a better vehicle that acts as an automotive reset button. In a world full of bigger, heavier, more powerful vehicles, this lightweight hatchback with the same 91-horsepower engine as the CRX Si is a breath of fresh air.

Everything is manual and delightfully tactile. You have crank windows, a manual moonroof, no power steering, a manual transmission … the list goes on. Visibility in the CRX may have been great, but in this bubble of glass, visibility is downright outstanding. The car is so small and there’s so much glass that checking your blind spot is almost an afterthought, requiring next to no energy to look around. Blind-spot warning is great and all, but if every car was like this old Civic, you really wouldn’t need it.

Much of how the engine sounds, feels and revs can be copied and pasted from our notes on the CRX Si. If anything, the sensation of speed is slightly dulled in the Civic Hatchback due to the higher ride height and seating position. Seriously, though, check out the monster truck-like wheel gap at the Civic’s stock ride height — you won’t see that on a modern hot hatch. 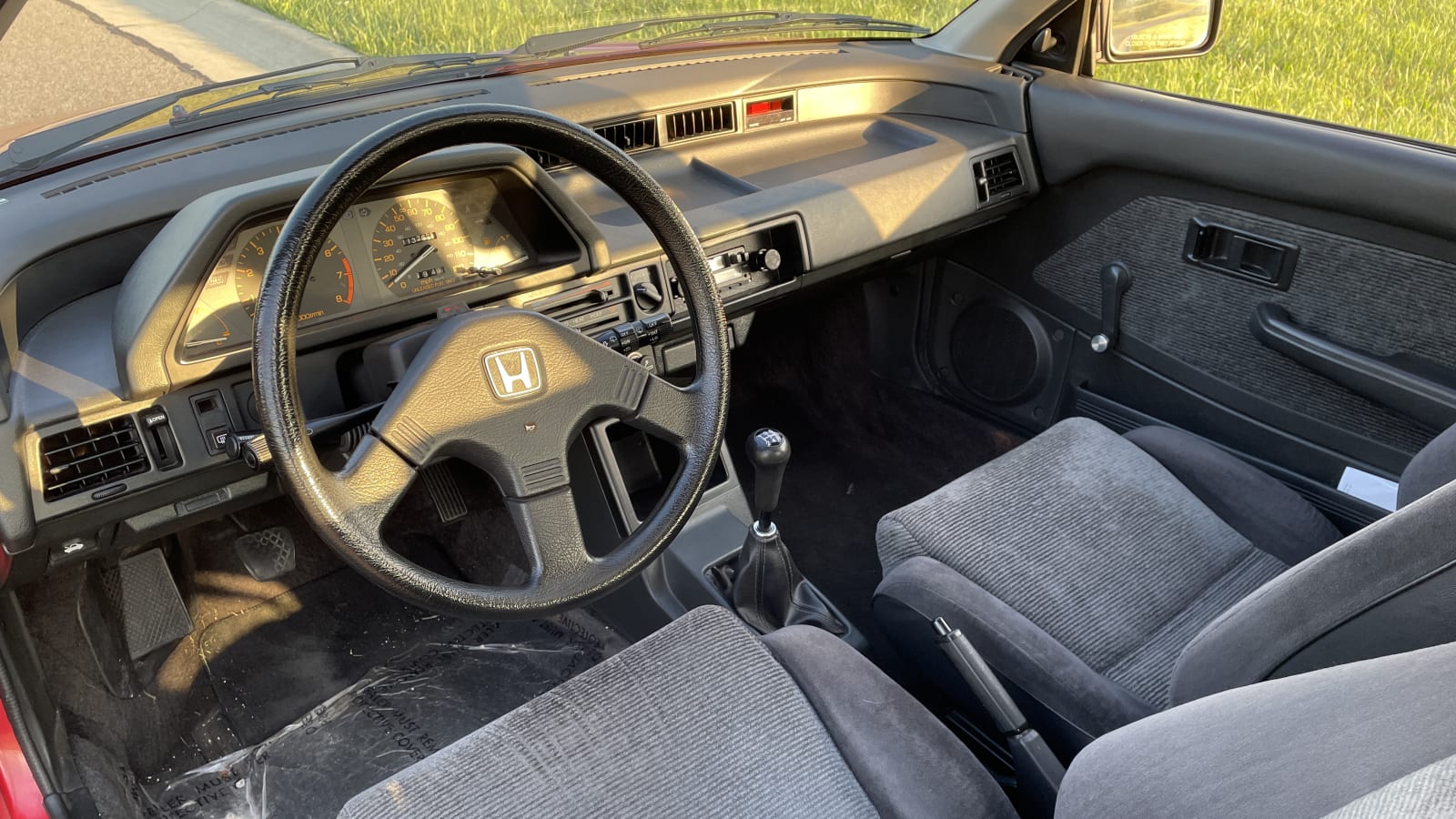 The five-speed transmission swaps through its cogs obediently, and while this shifter isn’t peak Honda yet, there’s excellent positive feedback and affirmation through each gear. For the mid-1980s, this shifter is spectacular. Both the CRX and this Civic Hatchback have sensitive throttle pedals and weighty clutch pedals that offer plenty of feel at the bite point. Power is about as far form exorbitant as it gets, so you end up doing a lot of shifting to keep the revs up and this little hatchback rushing forward with as much urgency as it can. The fun factor and level of involvement is sky high, even if the pace is far slower than every modern performance car.

Where your pace seemingly escalates is in the corners where that low curb weight turns this little car into a joyous feather to whip around. Similar to the CRX’s steering, this Civic’s non-power steering rack is great fun to use, always maintaining natural weighting and feel throughout a corner. A little forward or rearward movement helps get the wheel turned when at low speeds, but even stationary, this light car doesn’t require all that much arm strength to get the wheel turned — all part of the charm.

“Charming” may be the best way to describe this first Civic Hatchback Si, too. Thumbs ups and long stares follow around everywhere we drive it. This boxy, glass-filled hatchback brings a great deal of happiness into the world, and we’re glad to report that it’s just as charming to drive as it looks.

You’ve probably heard the term “CVCC” thrown around when discussing old Honda cars. And yes, it was such an important part of the original Civic Hatchback that Honda included it in the actual name of the car. In a nutshell, Honda CVCC (Compound Vortex Controlled Combustion) technology used a unique pre-chamber area to begin combustion of a very rich air-fuel mixture. A valve between this pre-chamber area and the final combustion chamber would open, allowing the explosion to trickle down, resulting in a very lean air-fuel mixture in this final chamber. The resultant emissions from this engine design were low enough to meet the stringent requirements at a time when every other car manufacturer needed to make use of a catalytic converter to do the same. This Honda needed no such addition, which was a massive technological achievement at the time. It was consequently a massive advantage for Honda as well, setting the company on the course for success that continues to this day.

Is driving a Civic Hatchback CVCC odd or weird in any way as a result of this unique combustion? Not at all! The 1.5-liter four-cylinder only makes 53 horsepower and 68 pound-feet of torque, but just like the other old Hondas we drove, this one accelerates out of its own way without any great struggle. OK, so the 0-60 mph time in the mid-15-second range is undeniably slow, but even on Michigan’s Woodward Ave. with hurried traffic all around us, we were keeping up just fine.

Running the revs up on this little hatchback through first, second and third gear is shockingly fun. Gearboxes in older cars can be downright burdensome and finicky to shift, but not this one. The five-speed — yes, five whole speeds — has great action for the time period, making it a hell of a good time to row through the gears with. The Porsche 911 of the 1970s wishes its transmission felt this good. So did those of the 1980s, come to think of it. 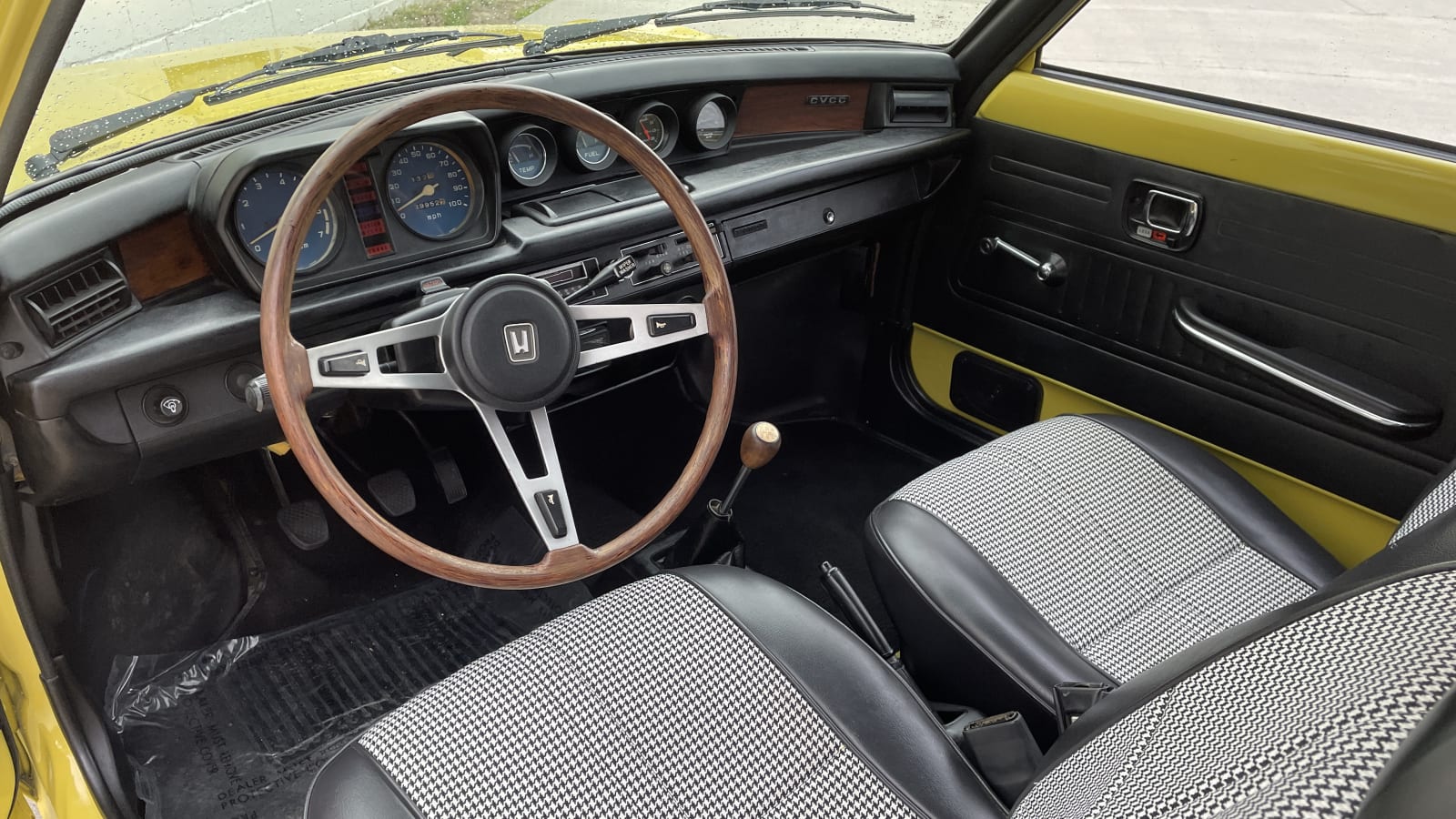 Honda paid great attention to the ride and handling quality of this little hatchback, fitting it with an independent rear suspension design despite the extra cost and effort it took to do so. For such a small car, it handled Michigan’s pockmarked roads without breaking a sweat. Bumps and manhole covers are no pain, as this tiny Honda filters them out nicely. We never got a great shot at testing this little hatchback’s handling ability, but it felt happy and perky to dip around the few corners we did encounter. That thin-rimmed wooden steering wheel is both artful and fitting for such a petite car. It just adds to the character of such a lightweight and eager-to-be-driven vehicle.

Utility was not forgotten in 1975 either. It’s a Civic after all! No, the backseat isn’t cavernous and as welcoming as the one in today’s giant Civic Hatchback, but it exists, and an adult could theoretically fit back there. And of course, don’t forget that this one is the Hatchback. Rather the full, cargo-revealing liftgate we’d expect today, the first-gen Civic’s rear opening consists only of the glass part way up the rear end. It’s weird by today’s standards, but not a debilitating feature. We’d also take the shape and style of the hatchback over a sedan any day, even if the ethos of a practical hatchback wasn’t fully realized in Honda’s 1975 attempt.

In fact, there’s a lot about this first Civic Hatchback that helps serve as an obvious starting point for an evolutionary line that ends with today’s Civic. Chief among them is just its downright fun personality. This original Hatchback is a small hoot to peddle around town in, and the new Civic Hatchback does well to keep that fun-to-drive nature. We dare you to cruise around in a 1975 Civic Hatchback and not grin ear-to-ear — it’s just one happy little dude.