SANTA BARBARA, Calif. — The 2023 Honda CR-V represents an all-new generation, and this time around it’s trying out something radically different: It’s actually trying to look good. Through five generations, Honda’s pioneering and best-selling compact SUV has checked off virtually every box in terms of practicality, making it difficult for shoppers to come up with an objective reason to say “no.” Subjectively, however, their designs have best been described as “utilitarian,” “anonymous” or, most recently, “ugly.” Most parents don’t buy their stroller or car seat on the basis of looks, why should a vehicular parenting tool like the CR-V be any different?

Being the best-selling compact SUV for every year of its existence would indicate that line of thinking is a popular one, but really, why can’t a CR-V also look good while still checking off all those practicality boxes? We’re happy to report that the answer turns out to be, “It can.” Styling will forever be subjective, but this generation is so much more cohesive and visually appealing than its blobby, sensible-shoes predecessor, it’s hard not to dwell on it. Especially when done up as the Sport trim levels now exclusive to the 2023 Honda CR-V hybrid, there is a clean sophistication to the design that harkens back to Honda’s ‘80s and ‘90s glory days. It may not be a Mazda CX-50, but there’s now a chance someone might actually choose a 2023 CR-V on the basis of how it looks. How about that?

And here’s the better news: There’s no tradeoff for those good looks. The CR-V is just as much of an uber-practical parenting tool as the vehicle it replaces. The back seat reclines to eight positions rather than two, and features 0.6 inches of extra space between the first and second rows thanks to an increased wheelbase, resulting in more room for legs and child seats. The latter also benefit from LATCH anchors no longer buried between the seatback and bottom – they instead reside in little plastic alcoves that couldn’t be easier to access. Unfortunately, the CR-V’s fifth lower LATCH anchor that allowed for easy center child seat placement has been removed, but that was an awfully rarely used feature. 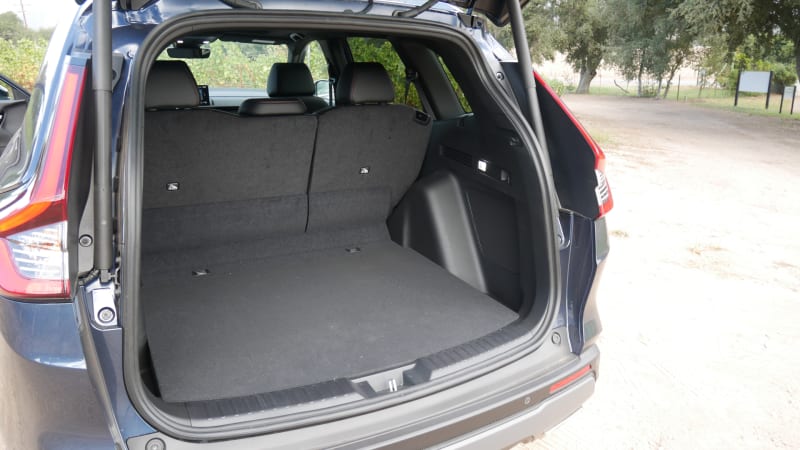 The specs say that cargo area volume behind the back seat is effectively unchanged with this latest generation, which puts it just below the segment behemoths from Kia and Hyundai. We’ll have to wait for a good old-fashioned luggage test to see how that shakes out in terms of real-world stuff, but there are a few obvious cargo-related notes. Maximum cargo volume is now best-in-segment at 76.5 cubic-feet, but the back seat doesn’t fold flat. Also, capacity may be the same regardless of powertrain, but the turbo model’s spare tire is replaced by the battery pack in the hybrid. The Kia Sportage and Toyota RAV4 hybrids manage to keep their spares.

Besides that one tradeoff, however, the 2023 Honda CR-V is at its best as the hybrid, which we’re reviewing here for the first time. While the turbo base engine carries over virtually unchanged, the hybrid is new. That includes a new 2.0-liter inline-four, a larger traction motor and power generator, various refinements, and an increased combined output of 3 horsepower and 15 pound-feet of torque to 204 hp and 247 lb-ft. Now, keen observers will note that the ’22 CR-V Hybrid specs say it produced more horsepower, but that was achieved with a now-outdated International Organization of Standardization (ISO) horsepower measurement. Using the new measurement, the old CR-V Hybrid was indeed less powerful.

The biggest improvements to the hybrid powertrain cannot be found on a spreadsheet, however. To put it simply, it’s just better to drive. Honda engineers managed to simulate shifts when the gas engine kicks on, providing a more natural driving experience and eliminating the blender-like droning of the outgoing car. This makes the CR-V feel more like a Kia Sportage or Hyundai Tucson hybrid to drive than a still-droning Toyota RAV4 Hybrid, even though it remains a totally different hybrid powertrain than all of the above.

Once again, the CR-V’s hybrid powertrain almost exclusively relies on the electric motor to power the wheels – the engine is only directly connected when at a constant cruise to maximize efficiency, and to that end, a new, second reduction gear allows it to operate at higher speeds. Otherwise, the engine acts only as a generator, and considering there is no traditional transmission, it would be best for efficiency and acceleration for the engine to stay planted at a just-right RPM to keep electrons flowing to the motor. Trouble is, as already stated, it sounds terrible. Or, as CR-V chief engineer Koji Ito puts it, “not in sync with human feeling.”

So the new CR-V hybrid sounds like it’s changing gears, and the engine note even has a bit of that old-school Honda zing about it as it approaches 100 on the instrument panel’s power meter. The weird thing is, though, it never loses any momentum as a car typically would when changing gears since the engine isn’t actually connected to the wheels. The electric motor keeps churning and pulls energy from the battery in those split seconds when the engine “shifts.” Ito acknowledges there is a tiny fraction of acceleration and efficiency lost by doing so, but says the drivability benefit is worth it. We concur. Not only does this setup better its hybrid predecessor, it actually makes for a more pleasing acceleration experience than the base turbo engine and its still-droning traditional CVT. It’s not just the shifting, either. Everything about the hybrid powertrain is quieter and more refined. 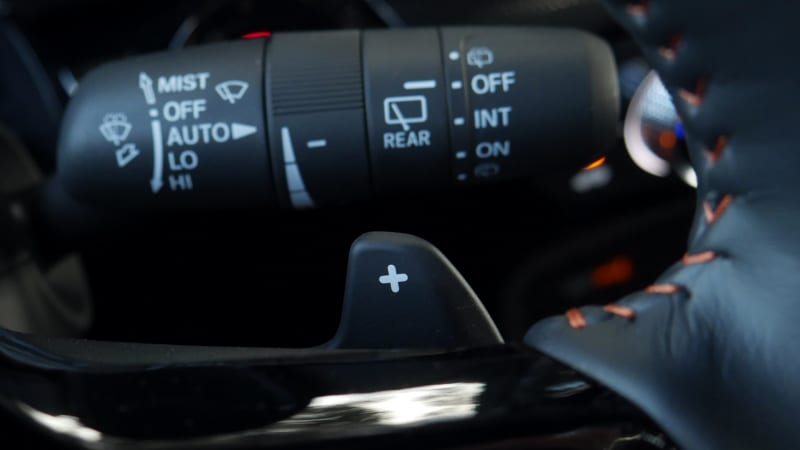 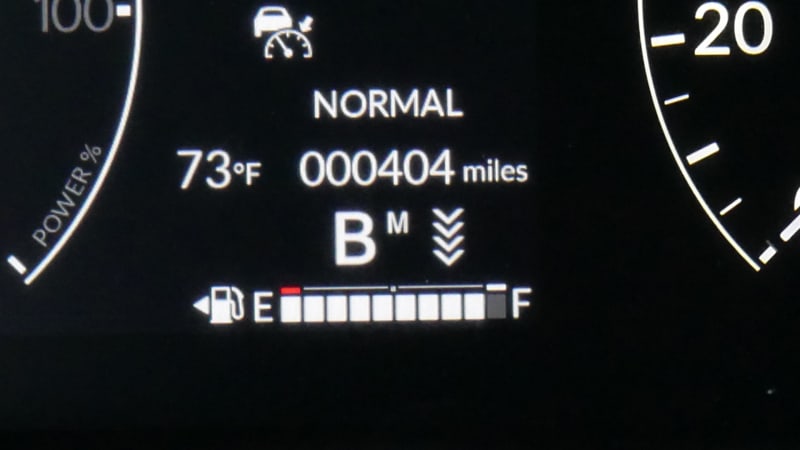 As for fuel efficiency, the 2023 CR-V hybrid achieves 43 miles per gallon city, 36 mpg highway and 40 mpg combined with front-wheel drive, which wasn’t available before. The all-wheel-drive system, which is now capable of a 50:50 power distribution versus the old 60:40 split, can achieve 40 mpg city, 34 mpg highway and 37 mpg combined. That’s 1 mpg combined worse than before, but at such elevated mpg figures, it barely matters. All-wheel drive is an option on the Sport and standard on the Sport Touring, and by the way, those are the only trim levels available as the hybrid. The EX and EX-L are exclusively paired with the turbo.

Another key hybrid-related update is the new B mode that increases regenerative braking to a point that’s perhaps 80% of the way to one-pedal driving. It won’t bring the CR-V to a complete stop as many EVs can do, but it does make a difference in terms of efficiency and in-traffic driver fatigue. It is selected by sliding the traditional shifter past D into B (the old CR-V Hybrid’s push-and-pull button shifter has been retired, thank goodness), and the driver can then fine-tune it by selecting one of four levels using steering wheel paddle shifters. The car won’t default back to the max setting when you start the car again if you were previously using it, which is a bit frustrating.

As for the rest of the driving experience, the 2023 Honda CR-V is notably a more refined and stable car than its predecessor. Driven back-to-back, it was surprising how much the old CR-V wobbled about with excessive lateral body motions. According to chassis engineer Yuki Morita, correcting that was a top priority for this generation, and stiffening the body was the primary solution, resulting in the 2023 CR-V feeling so much more stable and poised. It also allowed engineers to adopt lower-friction components throughout the steering system, which increases its smoothness and allows precision to remain constant even as effort has been lightened. Some may lament the CR-V’s steering has lost some of its immediate, comparatively darty character, but Morita says that was largely done on the old model to counteract the insufficiently rigid body and subsequent body motions. In total, the CR-V is now much better to drive. 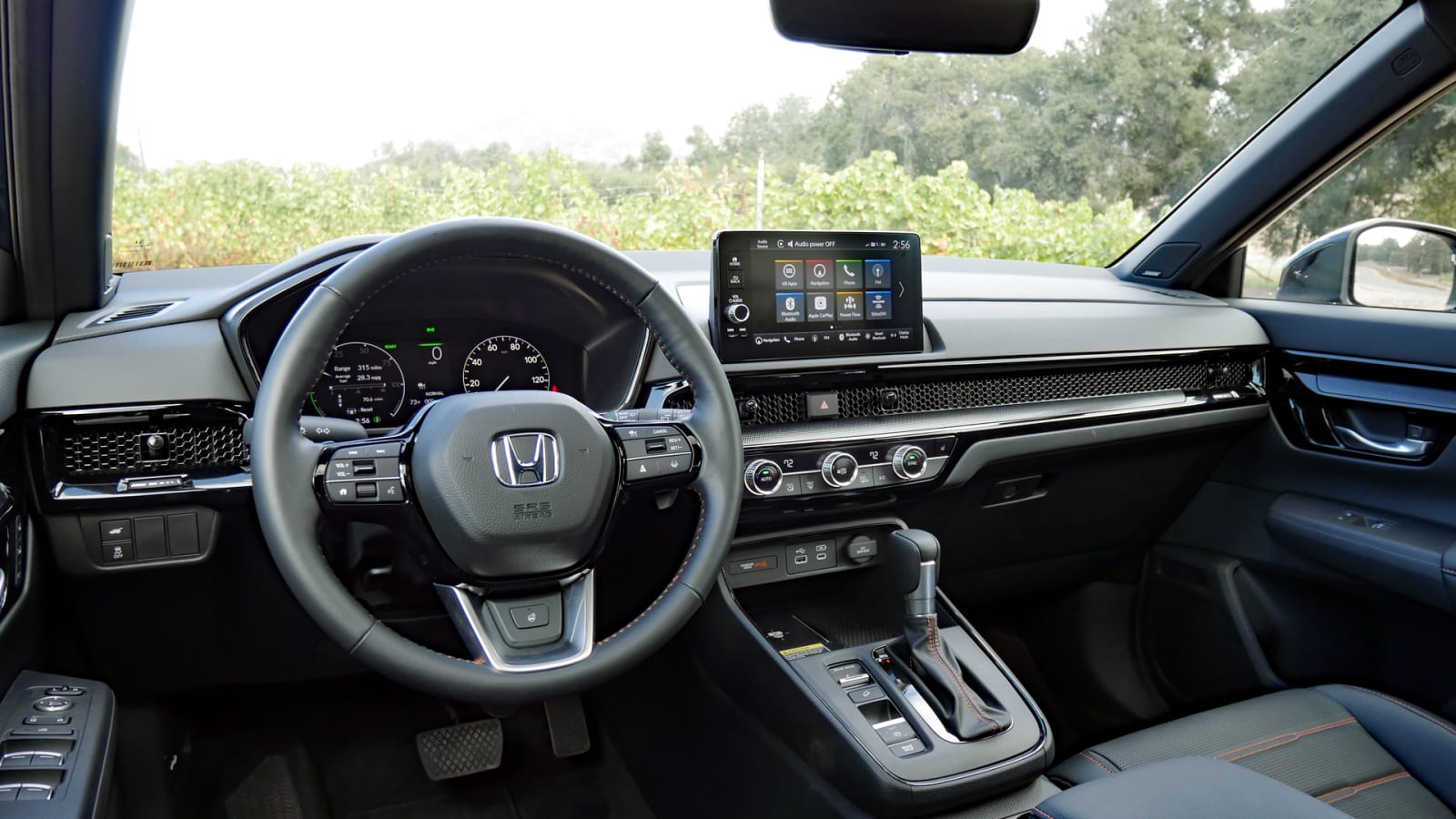 It also has a much better interior. In terms of aesthetics, it’s arguably an even bigger improvement than the exterior. The CR-V cabin has always been a bit van-like in design, and the outgoing one suffered further with plastic trim best described as “wood-adjacent.” The new interior, by contrast, is a lot less Odyssey and a lot more Civic, right down to the hexagonal metal air vent trim that slices ever-so-coolly across the dash. So yeah, better than whatever that wood stuff was. It may just be a matter of perception, but this new interior design does much of the heavy lifting in terms of making the new CR-V feel like less of a parenting tool.

It’s not just aesthetics, either. There is improved interior storage – your phone is less likely to fly out of the wireless charger, and there’s space alongside for a second phone to rest and/or be charged by adjacent USB-A or USB-C ports. Wireless Apple CarPlay and Android Auto are included, but you may not need them as much since the CR-V’s native infotainment system has been wildly improved from its glitchy, slow and menu-riddled predecessor. It’s mostly the same 7- or 9-inch units you’ll find in the Civic, with one key exception. Included with the Sport Touring’s 9-inch touchscreen, the integrated navigation system no longer looks like Honda outsourced the job to TomTom, and actually works with the hybrid powertrain to increase efficiency and/or performance. For instance, if the programmed route ahead shows an uphill grade, the car will effectively bank some battery power to mitigate the engine load.

Standard safety technology has also been improved, as it was with the Accord, Civic and HR-V. The forward collision warning system is less likely to throw up false alarms, the adaptive cruise control behaves more like a human driver and the lane-centering steering assist does a better job of doing what its name describes. There are also four additional airbags: two knee airbags up front and rear side airbags. 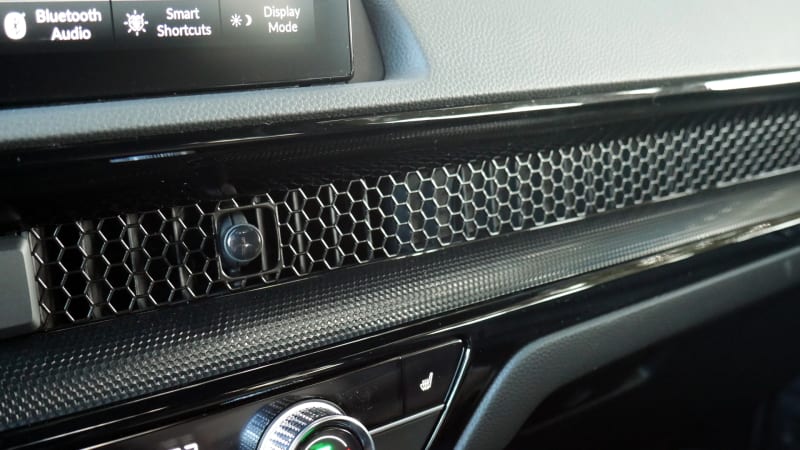 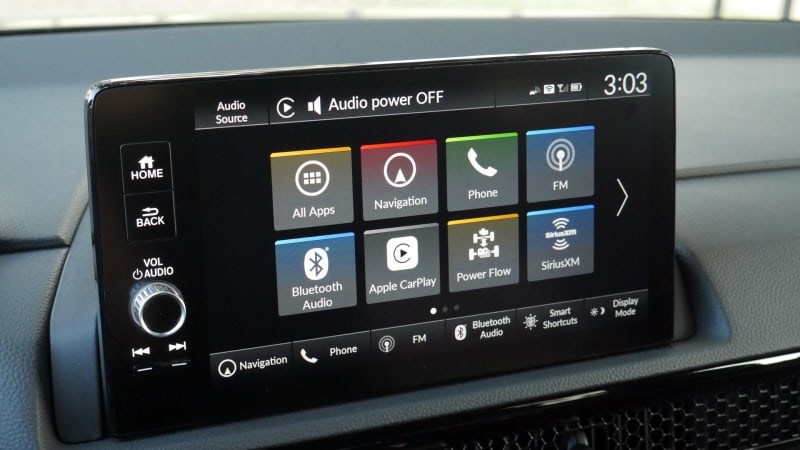 None of this new-and-improvedness comes cheap, however, as the 2023 Honda CR-V is notably more expensive than its predecessor. Much of this has to do with Honda changing the trim lineup:

Basically, if you want a hybrid powertrain and don’t care much about equipment or making the best-possible fashion statement, the Honda CR-V hybrid is no longer a good choice. You can get a base trim Sportage, Tucson or RAV4 hybrid for much less (that’s if you can find one on a lot without a hefty markup). When stacked up to the comparable versions of competitors, such as the RAV4 SE, Sportage SX Prestige and Tucson Limited, the CR-V is actually competitively priced.

Is it a class leader, however? We’d need a full comparison test to determine that, but it sure seems like the CR-V hybrid would at least put up one heck of a fight. At the very least, there’s no doubting that its sharp new looks have the potential to boost its popularity even further.